These wildlife wonders are surviving in a war zone –   OZY.com 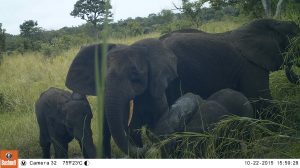 Discovery of forest elephants and other previously unrecorded mammals in the “Forgotten Forests” of South Sudan. Covered by multiple international media outlets, including The Associated Press, Smithsonian Magazine, Huffington Post.

As the Ebola crisis rages, West African villagers are warned away from fruit bats – Public Radio International’s “The World” with online commentary

Danger Lab! The Bats and the Bees –   Mental Floss Magazine

How I Survived Malaria, Bats, and Broken Bones in South Sudan – Discover Magazine

Killer in the Caves. 2013. Smithsonian Channel.

“In a race against time, Dr. DeeAnn Reeder is searching for a mysterious killer. A disease known as white-nose syndrome is wiping out bat populations by the millions – and the cause and cure are still unknown”. – Winner of the 2013 AAAS Kavli Science Journalism Award for In Depth Science Reporting.

The race to save Pennsylvania’s bats. 2012. WQED-TV

– Winner of an Emmy Award for Health/Environment/Science Program.

Bats may be poised for a comeback from white-nose syndrome. – Sierra. The National Magazine of the Sierra Club

No time for bats to rest easy – The New York Times

What is killing the bats? – Smithsonian Magazine